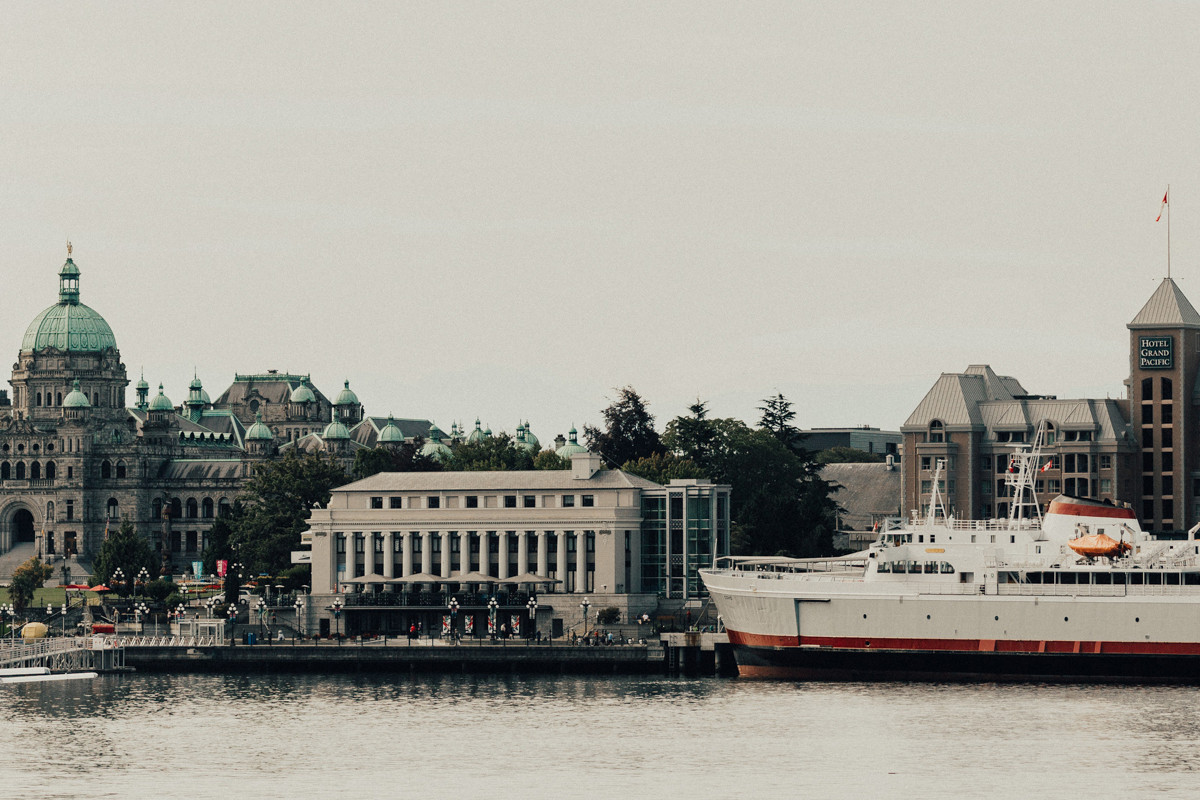 The 90-minute, 22.59 nautical mile (42 km) trip is a scenic journey through the Strait of Juan de Fuca. During the crossing, enjoy the ship's many amenities including the cafeteria, gift shop, duty free store, comfortable interior lounges, solarium and pet-friendly areas.

The company's administrative offices are located in Seattle, with terminals and operations personnel at both Victoria's Inner Harbour and Port Angeles. Employing over 100 people in peak season, the familiar sight and sound of the M.V. Coho has become a permanent fixture of the landscape in the region for over 60 years. In 2019, Black Ball Ferry Line celebrated its 60th anniversary of service as a vital tourism and transportation link between Vancouver Island and the United States. Through decades of operation, Black Ball Ferry Line's flagship has developed an unparalleled record of reliability.

In 1959, Black Ball Ferry Line's founders R.J and Lois Acheson contracted Phillip F. Spaulding & Associates of Seattle to design M.V. Coho. Her keel was laid on January 12th, 1959, at the Puget Sound Bridge & Dry Dock in Seattle. She made her first commercial sailing to Victoria on December 29, 1959. In addition to servicing the Port Angeles to Victoria vehicle and passenger route, the M.V. Coho also carried freight trucks between Seattle, Port Angeles, Port Townsend and Victoria. This service ended in 1973, when the company decided to focus on the Port Angeles to Victoria route.

Onboard the vessel floor to ceiling windows, easily accessible outside decks, and the covered solarium provide passengers with stunning, close up views of the Olympic Peninsula and the wildlife that live in and around the Strait of Juan de Fuca. Ship amenities include a gift shop, featuring an array of unique gifts that reflect the essence of the west coast, and a cafeteria that serves a wide variety of hot and cold food and beverage items, including specialty sandwiches and soft serve ice cream.

Since commencing operation in 1959, the M.V. Coho has transported more than 26 million passengers, and over 7 million vehicles.

In addition to the engine refit, the Coho has undergone many improvements over the years, including additional seating, enlargement of the coffee shop, installation of a solarium, and a sewage treatment plant.

The History of Black Ball 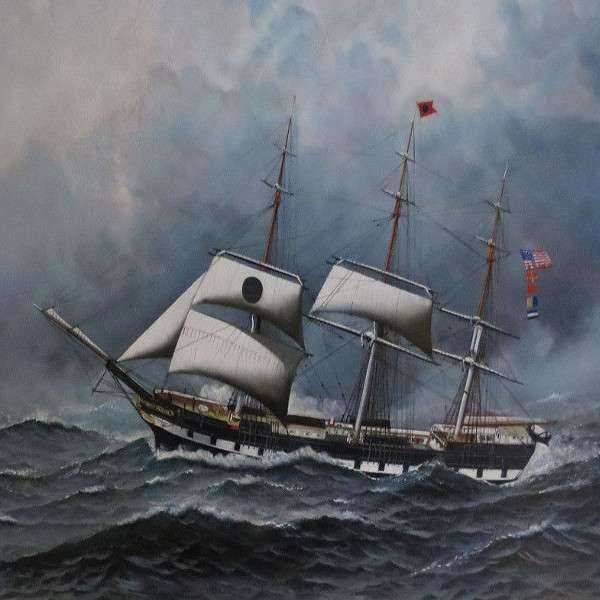 In 1818 Captain Charles H. Marshall founded the Black Ball Line, the first scheduled transatlantic passenger service, employing a fleet of clipper ships, one of which was commanded by the founder's brother Captain Alexander Marshall. This service operated for over 60 years between New York and Liverpool flying the house flag, which consisted of a black ball centered on a red background. 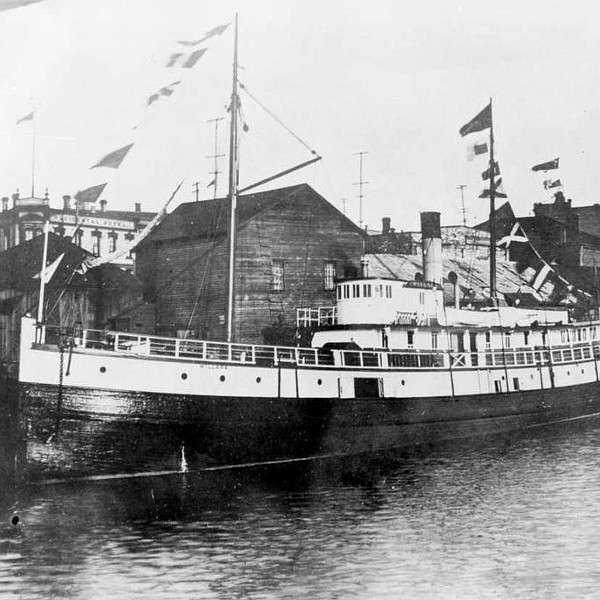 Charles Peabody, grandson of one of the founders, moves west to Port Townsend, WA and starts the Alaska Steamship Company, bringing with him a variant of the Black Ball flag. 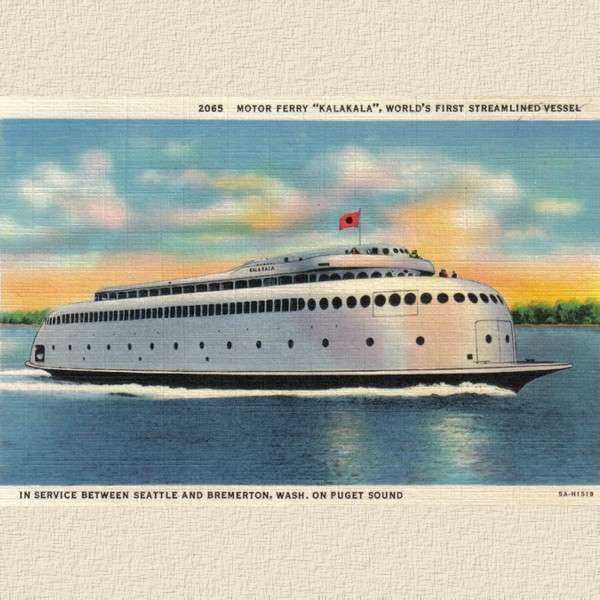 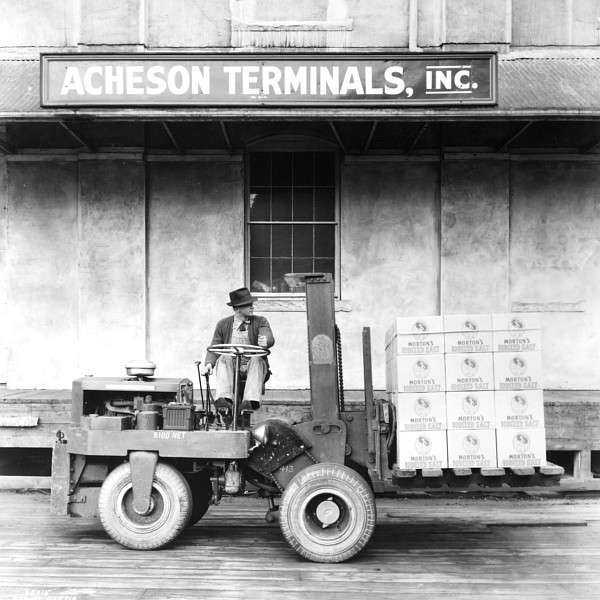 Robert Acheson purchases Black Ball Freight Services from the company, eventually introducing Black Ball Transport and a new variant of the flag with a white circle that is still in use today. 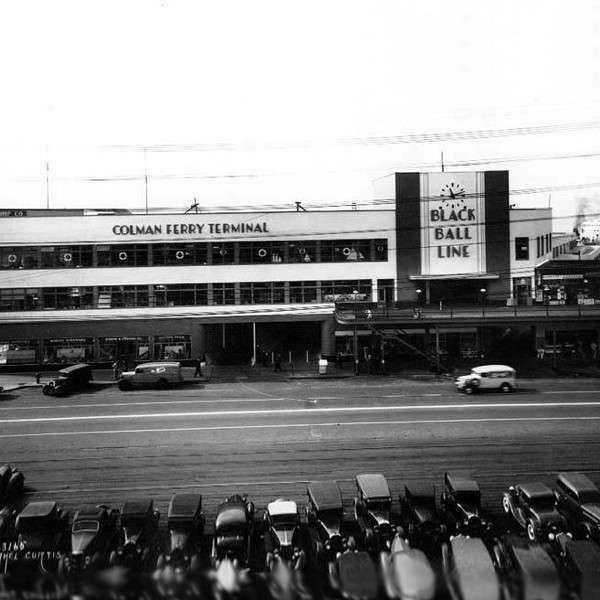 In 1951, using these assets he organized Black Ball Ferries, Ltd. a Canadian company, which operated until the sale of most of its assets to the British Columbia government in 1961. Black Ball Ferry Line can also trace its origins to the Black Ball Line, though in somewhat less direct fashion. Our founder, R.J. Acheson, began his career in transportation at the age of 11 in Medicine Hat, Alberta with the Canadian Pacific Railway as a callboy, eventually becoming a dispatcher. In 1924, he decided to move to Seattle. He first worked as a freight checker for the Nelson Steamship Company and later became general manger. In 1932 he became traffic manager for Black Ball Line. In 1936 he purchased Black Ball Freight Service, which had been a subsidiary of Black Ball Line. By 1951, Mr. Acheson's operation included 200 trucks and trailers and employed 125 people. 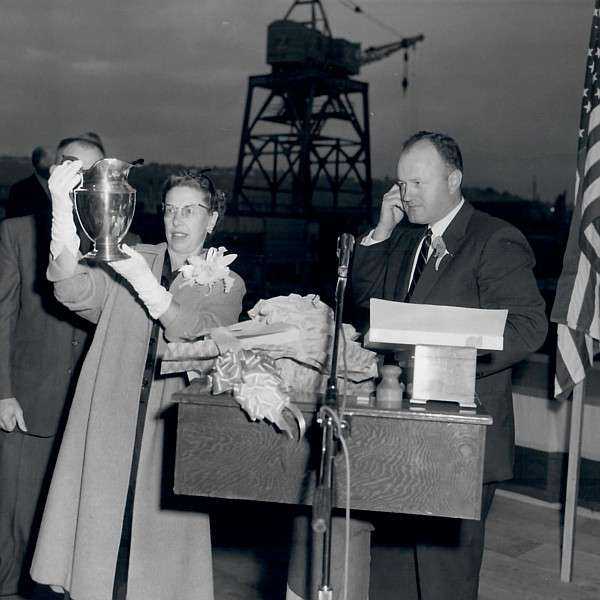 In 1952, Mr. Acheson and his wife Lois organized a new subsidiary of Black Ball Freight Service, naming it Black Ball Transport, Inc. Mr. Acheson requested from Captain Peabody permission to incorporate a new version of the famous Black Ball flag for his new company. The new flag was very much like the old, with the addition of a thin white circle around the black ball. To this day, we proudly fly the same flag. In the first few years of its existence, Black Ball Transport, Inc. operated the IROQUOIS, a steamship Mr. Acheson purchased from Black Ball Line and converted to a motor freighter. The IROQUOIS ran the overnight freight run year-round between Seattle, Port Townsend and Port Angeles. From 1959 to 1969, she ran in the summer only. 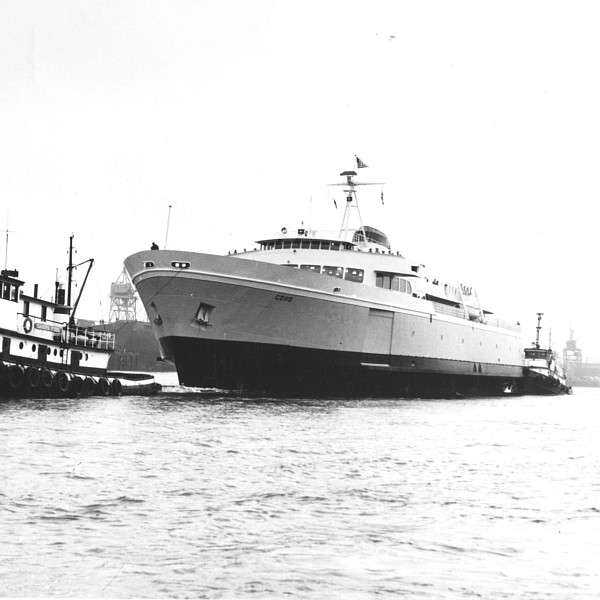 In 1959, Black Ball Transport, Inc. built an auto and passenger ferry, naming it the M.V. Coho, after the magnificent silver salmon found in Puget Sound and adjacent waters. Philip F. Spaulding & Associates of Seattle designed the vessel, and her keel was laid January 12, 1959 at the Puget Sound Bridge & Dry Dock in Seattle. She made her first commercial sailing to Victoria, B.C. on December 29, 1959. Initially, the M.V. Coho not only serviced the Port Angeles to Victoria vehicle and passenger route, but also carried freight trucks between Seattle, Port Angeles, Port Townsend and Victoria for Black Ball Freight Service. In 1973, Black Ball Freight Service was sold to ROCOR International, but Black Ball Transport, Inc. has continued to operate the M.V. Coho on the Port Angeles to Victoria vehicle and passenger route to this day. 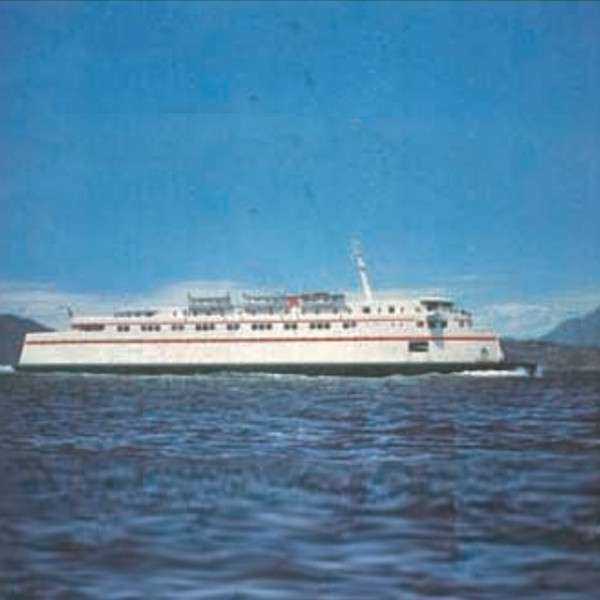 After introducing service in 1951 as Black Ball Ferries Ltd, Peabody sells his Canadian vessels and operations to the Province of British Columbia, integrating them into what is now the BC Ferries corporation. 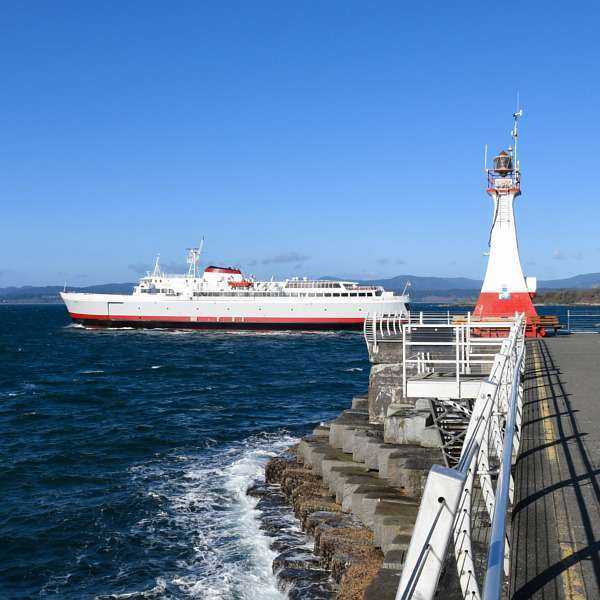 Black Ball Transport is left to Oregon State University Foundation in trust after Lois Acheson's passing as part of a $21 million gift to endow the Lois Bates Acheson College of Veterinary Medicine. 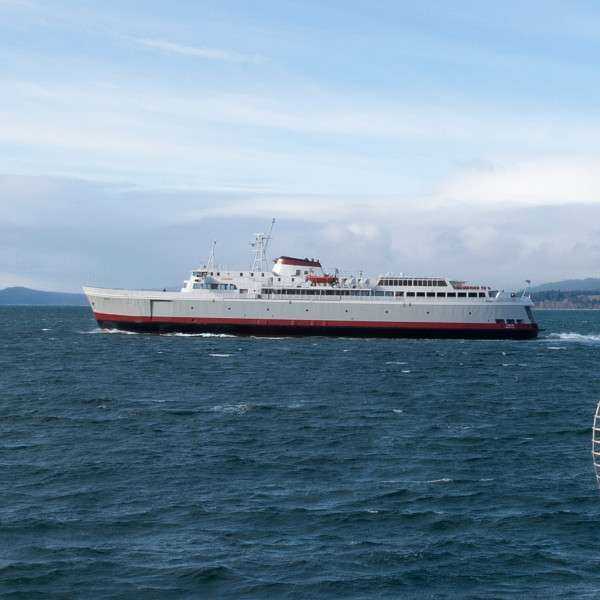 In 2008, Black Ball Transport Inc. received a new operational name “Black Ball Ferry Line.” Our ship, the M.V. Coho is 341.6 feet long, has a breadth of 72 feet, a draft of 12.6 feet, twin 8-foot stainless propellers and twin rudders. She has a vehicle clearance of 14 feet, and a carrying capacity of 110 vehicles and 1,000 passengers.

In addition to the engine refit, the M.V. Coho has undergone many improvements over the years, including additional seating, enlargement of the Coffee Shop, installation of a solarium, and a sewage treatment plant. 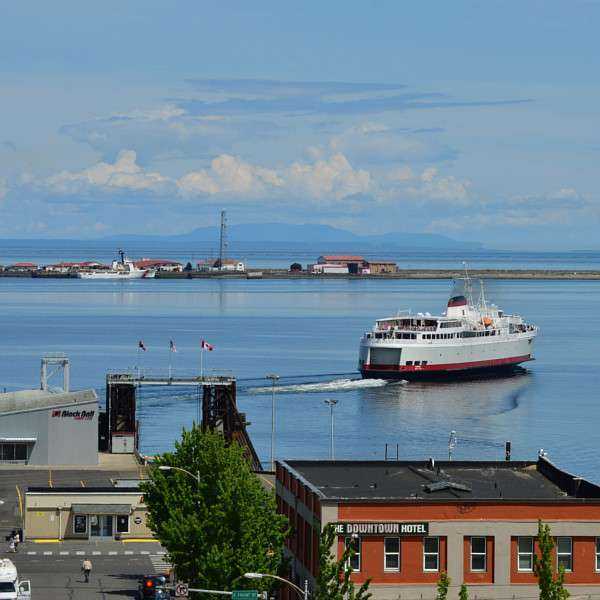 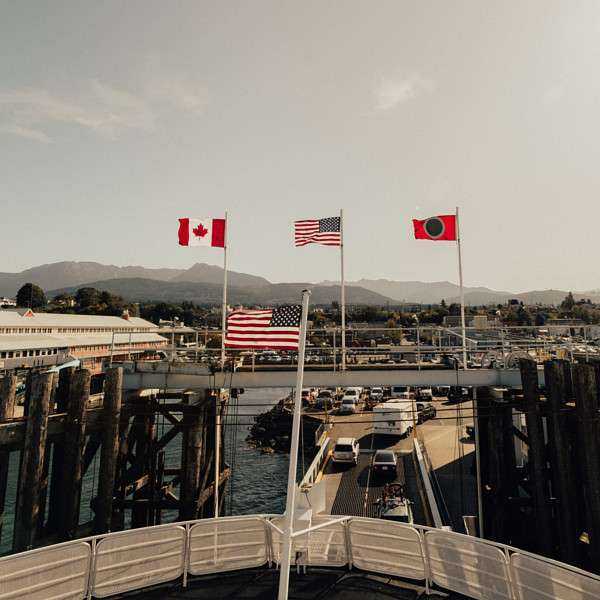 We celebrate 200 years of the Black Ball flag in maritime operation! 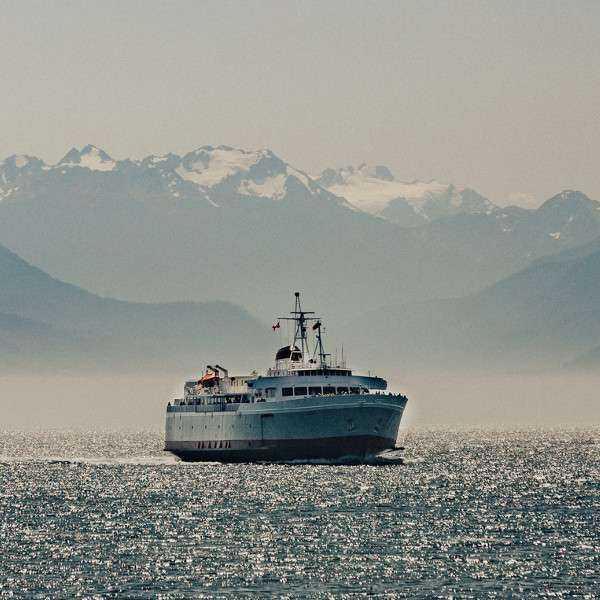 If ships had memories, the MV COHO would have quite a life story to tell! COHO has seen her share of celebrity passengers, unusual vehicles (from the Rolls Royce Club to Deuce Coupes to enormous commercial trucks), whale sightings, and even a wedding or two. So many happy memories have been made onboard!

From all of us at Black Ball Ferry Line, thank you for your support, and we look forward to serving you for many years to come!